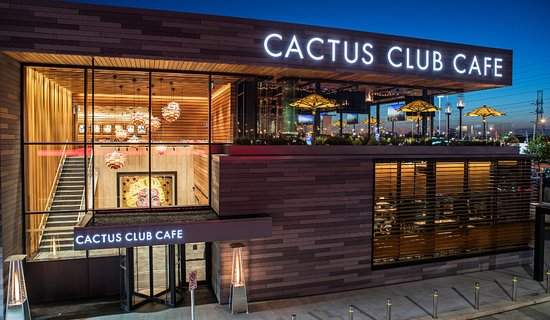 Cactus Club Cafe is a Canadian-owned chain of premium casual restaurants that originated in North Vancouver, British Columbia. The chain has expanded to 31 locations across Canada, with other locations in British Columbia, Alberta, Saskatchewan, and Ontario.

Cactus Club Cafe was founded in 1988 by two former Earls waiters, Richard Jaffray and Scott Morrison. The partners began with a restaurant called “Cafe Cucamongas”, which they sold in 1988 to establish the Cactus Club. In 1996, the company expanded into Alberta during a financially challenging period. The organization continued to thrive, and by 1998 the company had expanded to 10 locations in British Columbia and Alberta.[1] In 2005, Richard Jaffray bought out Scott Morrison’s interest in the business; Morrison has founded Brown Socialhouse, a similar chain of premium casual restaurants from Canada.

One of Canada-owned casual chain dining restaurants starting on the North Shore of Vancouver, Cactus Club Café is a popular spot to get creative with their food. The company is headquartered in downtown Vancouver and its restaurants are known for their fun atmosphere. Many Cactus Club restaurants are a bit more advanced, with modern and classy interiors at prime locations.

The Cactus Club restaurants are also kid-friendly. They are not “family restaurants” and do not have special children’s menus. Although there are many young families like him, most places have booster seats and high chairs, as well as crayons and paper to color. Their clients are usually young to middle-aged adults. However, except in the bar section, children are welcome.

There are seven Cactus Club locations in downtown Vancouver including a couple on the waterfront. For example, located on a beach in English Bay. The Cactus Club at Jack Pool Plaza, meanwhile, has equally great views of Coal Harbor. If you want to impress your friends, family, or date, do your best to get a window seat. Prime tables at these restaurants make for a memorable dining experience (especially during sunset)!

Other locations within the City of Vancouver are on Robson Street, on Davy Street in Yaletown, in the Bentall Building on Burrard Street, and on West Broadway at Camby Street at one end and Ash Street at the other.

The menu varies slightly depending on the locations of the chain you visit. However, for the most part, classic menu items, such as burgers, pasta, and steak, remain the same throughout the company.

Most of the restaurants serve a selection of Asian-inspired rice bowls as well as more traditional beef burgers and chicken sandwiches. They usually have at least a few fish and pasta entrées, as well as a half dozen or so steaks.

Some menu items are only available in certain restaurants and dishes may vary. For example, last time we checked, some places had 12 ounces of Millionaires Cut steak available, but others only had 11 ounces on the menu. Why? We don’t know. Perhaps people in some Lower Mainland communities are not as hungry as people in other parts!

Some places offer a brunch menu, but others do not. Most attend the Dine Out Vancouver Festival in January or February, but not all of them every year. Those who participate usually offer similar menu options, but not always.

Although all the menus are very similar but also slightly different, and their prices on some items can be as high as 25 cents or so, the quality of the food is always high.

The Cactus Club also offers special menu sections for dishes that are plant-based, vegetarian, and gluten-smart. All menu items have symbols that indicate dietary guidelines, but the separate sections are a unique feature of this brand’s menu.

How does the restaurant compare?

It’s hard to say how different Cactus Club is from its competition. It’s arguably a little less expensive than the Keg and has a reputation for being more kid-friendly than Earls. The Cactus Club has a slightly larger menu than The Keg with a wider range of food options. It’s also “West Coast” with more seafood and Asian-inspired dishes on its menu.

To learn more about how the above restaurants compare among themselves as well as with other locations like Boathouse, Moxies, Milestones, and JOEY, check out our article about casual dining restaurants in Vancouver.